The winner of the “Hotel Property Award 2021”

196+ hotelforum Munich: Ruby Luna Düsseldorf is the winner of the “Hotel Property Award 2021”

Other prize-winners: Das Schlafwerk in Stuttgart and the Villa Copenhagen in Denmark 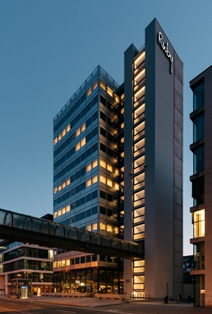 Munich, 13 October 2021 – This year’s “Hotel Property Award 2021” goes to the Ruby Luna in Düsseldorf. The prize was awarded today at the as part of the hotelforum 196+ conference.

Andreas Martin, Jury Chairman: “This year’s prize-winner convinced the jury in many areas: central location in Düsseldorf’s banking district, translation of the spirit of optimism of the 1960s into an interesting story, and Ruby’s tried-and-tested design, with high-quality fittings and its focus on the essentials. The convincing conversion of the listed former Commerzbank office building, which was planned and built in the early 1960s by Düsseldorf architect Paul Schneider-Esleben, is a good example of the spirit of optimism of that Economic Miracle period, and is considered in architectural terms as a striking high-rise building. All processes relating to ecology during the conversion were audited by the DGNB, from the beginning of the planning to the handover (target standard “Gold”). The Ruby Luna also scores in terms of sustainability by converting the former office building into a hotel.”

“We are not trying to be all things to all people”, is how the Ruby Luna describes its target group, offering 206 rooms with individuality and character in its “affordable luxury” cosmopolitan avant-garde product. The interior design in the public areas echoes the era of the Economic Miracle. Mankind’s reaching into space and the fascination and joy of futurism are evident in all areas. The “floating” open ground floor has been glazed all around, and creates a special sense of space in the public areas through the visible oversized concrete structure. The former concrete ramp access to the basement has been sealed with glass panels, and still allows you to look downwards. The area of the former gatehouse with the former switchboard on the raised paving stones has also been integrated into the lobby. Rockets and “space capsules” – an original space suit, partly from a flea market, can be found above the heads and under the feet of the guests. The bar, with its gold-tinted glass panes, contrasts with the open rough concrete ceiling of the public area. The “Lunar Dunes” courtyard is built in the style of a desert landscape with its own UFO, and the Observatory Bar on the 13th floor on the roof offers a panoramic view of Düsseldorf.  The interdisciplinary 18-member jury pre-selected among the 28 candidate hotels from 12 European countries to choose ten nominees from five countries. The following three hotels were selected from these nominees for the final round (in alphabetical order):

Andreas Martin: “All three finalists are highly-specialized products that focus precisely on their target group. The Schlafwerk is of course particularly exciting, as it represents a quantum leap for accommodating fitters and craftspeople.”

Das Schlafwerk in the North of Stuttgart is Germany’s first hybrid concept incorporating a hotel and a boarding house that is specially designed to meet the needs of craftspeople and fitters. The development aims to become the price leader on the market – positioned below the well-known budget brands in terms of price, and deliberately alongside them: Extended stays are possible at the Schlafwerk, and are welcome. This creates budget hotel-level comfort higher than that of many other types of accommodation for craftspeople. Das Schlafwerk offers many room options, from single rooms to 6-bed rooms, both for one night and for extended stays, with the option of self-catering accommodation if desired. The team room is deliberately designed so that smaller groups of craftspeople can share a room with the option of self-catering.

In order to be able to offer a reasonable room rate, the Schlafwerk offers reduced space and equipment and a digital guest journey (digital access 24/7): accessible to guests without requiring a permanently installed app, only with a digital registration form, and “remote controllable” for the staff from anywhere in the world thanks to IOT. The Schlafwerk is conveniently located at the intersection of the A81 motorway and the B27 main road, so that it is close to large highly dynamic industrial and commercial areas. These include companies such as Porsche in Zuffenhausen and Bosch in Feuerbach, both just a few kilometers away. Accessibility by car (the target group being craftspersons and fitters), and the infrastructure facilities of the micro-location, are of great importance. A 24/7 petrol station, a discount store, several restaurants and a swimming pool are right nearby.

The concept of the Villa Copenhagen is “conscious luxury in a Scandinavian-international style”, accessible to everyone and thus offering diversity. This layout was integrated into a historic post office building from 1912, and offers 390 rooms, 2,000 square meters of conference and meeting rooms, a gym, an outdoor pool and a sauna complex, a garden, two restaurants, four bars and the exclusive event area “The Board”. The hotel is located right next to Copenhagen Central Station, opposite the Tivoli Gardens. This neo-Baroque building at the intersection of Bernstorffsgade and Tietgensgade has been restored to look exactly as it did when it was opened in 1912, when the Danish Post Office moved its headquarters there. In terms of energy, the surplus heat from the kitchen is used to heat the pool on the roof, enabling it to be open for many months of the year. In addition, the conference room has been fitted with a grassed roof.

Five firms are responsible for the interior design: Goddard Littlefair, Universal Design Studios, Eva Harlou, Shamballa and Krook och Tjader. Eva Harlou designed the “Earth Suite” with her interior design firm, which combines high-quality design with a sustainable mindset: A fully sustainable suite with only recycled materials and textiles, as well as eco-friendly furniture by Danish manufacturer Mater Design. Shamballa Jewels combines ancient Eastern philosophy with Nordic design traditions, and has furnished the hotel’s eight suites, including the “Shamballa Jewels Suite” and the event space “The Board”.

The Award targeted both hotel developers, owners and operators. Applications to the “Hotel Property Award” were received from hotels which were opened between January 2020 and July 2021. The jury was looking for a successful interplay between architecture and design, integration into the project environment, sustainability and technical innovations, the originality of the concept, as well as cost-effectiveness.

The winners of the “Hotel Property Award 2021”:

Type of operation/category: no classification

You can find image material on the finalists via the following link. Please note the photo credits that are in the picture name. If this is not the case, please name the hotel: